“Drilling at Evolución in 2019 continued to hit broad zones of mineralization on the Lechuzas target,” stated Ben Pullinger, Senior Vice President Geology. “Based on these results, we are now assessing the opportunity to advance to an initial mineral resource estimate. We have also made a positive start on the Jaboncillo target, approximately 11 kilometres northwest of the Platosa Mine. This target was identified by regional geophysics and prospecting and has an alteration footprint larger than that at Platosa. Our initial drilling intersected a large hydrothermal system with anomalous precious and base metals that may represent the periphery of a CRD system. Follow-up is required.”

Mr. Pullinger continued, “We also look forward to commencing drilling at our newly optioned Silver City Project in Q2, as initial permitting is progressing well. We continue to refine drill targets and improve our understanding of the regional opportunity. The Silver City area was mined for high-grade silver for 750 years until the late 1800s, yet has never seen modern exploration for precious metals.”

The Evolución Property totals 45,000 hectares (450 km2) and 35 kilometres of strike in one of the world’s premier silver mining districts.

In addition to this drilling, the Company has also commenced reassaying, recategorizing and relogging of mineralization associated with the Calvario vein and other secondary strutures.  Pending the results of this program, the Company intends to incorporate these and drilling on Lechuzas into an updated mineral resource estimate and associated technical report.

The Lechuzas structure is hosted within the Caracol Formation, which hosts the most significant deposits on the Fresnillo trend. Precious and base metal mineralization is associated with structural features featuring carbonate and quartz veining that crosscut the host rocks. Pyrite, sphalerite, and galena are the most commonly observed sulphide minerals.

Other Targets at Evolución

Several other targets at Evolución were tested as part of this program. Drilling at the Abejas target encountered mineralization associated with mineralization within silica and quartz veining associated with an epithermal system. Textures observed in veining are indicative of the boiling of fluids seen at the top of the productive zone for precious metals in these systems.

The Laika target, approximately 22 kilometres east of Miguel Auza, was discovered by regional prospecting and mapping which identified a large area with quartz float within a region highlighted by long and short-wave Aster imagery. Two holes were drilled (1,095 metres) and intersected a large argillic-altered zone close to the contact of a series of rhyolitic volcanic rocks overlying the Caracol Formation. Field work at Laika and surrounding areas is planned for the first quarter of 2020.

Mineralization on the Evolución Property is hosted by epithermal quartz veins typical of the Fresnillo silver trend. Hecla Mining Company’s San Sebastián Mine is located 42 kilometres to the northwest and along strike from Evolución. Mining in the Evolución area was historically undertaken on the Calvario Vein accessed by multiple shafts along the structures currently being tested as part of Excellon’s program. Compilation and 3D modelling of historical level plans for Calvario along with the 2018-2019 oriented core data defined a structural extensional/dilatation zone. The Calvario structure remains open at depth with several historical holes showing potentially economic values up to 400 metres below surface.

The Evoluión Property includes a mineral processing facility, which processes ore from Excellon’s Platosa Mine. The mineral processing facility has capacity of 800 tonnes per day (“tpd”), with a 650 tpd ball mill in operation and a 150 tpd ball mill on standby, with opportunities available for further expansion. Ample capacity remains available to process increased Platosa Mine production and potential new discoveries at either Platosa or Miguel Auza, along with ore from San Sebastián under a toll milling arrangement that is currently in the bulk sample testing phase.

Regional drilling at Platosa focused on the Jaboncillo target 11 kilometres to the north west of the Platosa Mine within the Sierra Bermejillo. Twenty holes were completed and tested six targets over a strike length of 1,200 metres. All holes in this program intersected evidence of a large hydrothermal alteration system with ten holes intersecting gossans and jasperoid. Additionally, large intersections of sulphide bearing breccias and anomalous precious and base metals were intersected in other holes. These intersections are believed to be the peripheral part of a CRD system.

EX19JN-008 intersected a pryritic gossan intersection of 13 metres including discrete intervals of anomalous silver up to 15 g/t Ag and 0.1 % Zn with anomalous antimony, molybdenum and arsenic. The gossans and breccias occur with calcite, celestite and clays with an iron rich matrix. EX19JN-013 intersected a fifteen-metre thick Jasperoid unit with anomalous silver (17 g/t) and anomalous barium and iron. EX19JN-013 also intersected a pyritic breccia over nine metres showing up to 7.2% Fe. The breccia contains clasts of multiple lithologies and pyrite within a black pyrite-clay matrix. Other holes intersected gypsum-pyrite breccias. These breccias include host rock clasts within a gypsum matrix with fine pyrite along the contacts. Based on these initial results, the Company intends to test additional targets in this area during 2020.

Drilling from surface proximal to the NE-1S Manto at the Platosa Mine continued to intersect high grade massive sulphide mineralization over significant widths and suggests that the Platosa deposit remains open for expansion. Results include:

In 2019, the Company concluded a comprehensive review of the Platosa Property land holdings and subsequently filed to reduce its land package to 14,000 hectares from 21,000 hectares with reductions made in areas of significant overburden and where geological work indicated little potential for further discoveries. The reduction will result in significantly lower holding costs.

The Silver City Project continues to advance, with an IP survey completed over two targets on the northern part of the license. Three lines were completed over the Munzig target, an area of historical high-grade production, with records indicating veins from 2 to 10 metres wide grading 1,000 g/t Ag. Two lines were completed over the Steinberg target, which followed up on surface sampling that contained anomalous silver, arsenic and lead. High resistivity and chargeability anomalies were detected at both targets and have been defined within prospective settings that will be tested during initial drilling.

Fluid inclusion studies completed by the University of Freiberg on samples from historical mine workings covered a strike length of approximately 15 kilometres of the main vein system. These studies confirmed systematic vertical mineral zonation within the larger epithermal system and an expected vertical extent of the productive zones of between 300-400 metres. Compilation of historical reports, maps and images from the Freiberg archives have allowed the Company to model historically mined areas, providing more detailed information on targets ahead of drilling.

The Company has filed an operations plan with local regulators to permit an initial 1,500-2,000 metre drill program. This program is designed to test down-dip and lateral extensions of historical mine workings and new targets concealed below shallow overburden (see Figure 2: Silver City Targets). Permits are expected in the coming months.

Drill core samples are prepared and assayed by SGS Minerals Services in Durango, Mexico. The lab is accredited to ISO/IEC 17025. The Company has a comprehensive QA/QC program, supervised by an independent Qualified Person.

Excellon’s 100%-owned Platosa Mine has been Mexico’s highest-grade silver mine since production commenced in 2005. The Company is focused on optimizing Platosa’s cost and production profile, discovering further high-grade silver and carbonate replacement deposit mineralization on the 14,000-hectare Platosa Project and epithermal silver mineralization on the 100%-owned 45,000-hectare Evolución Property, and capitalizing on current market conditions by acquiring undervalued projects. The Company also holds an option on the 164 km2 Silver City Project in Saxony, Germany, a high-grade epithermal silver district with 750 years of mining history and no modern exploration.

Additional details on the Platosa Mine and the rest of Excellon’s exploration properties are available at www.excellonresources.com.

The Toronto Stock Exchange has not reviewed and does not accept responsibility for the adequacy or accuracy of the content of this Press Release, which has been prepared by management. This press release contains forward-looking statements within the meaning of Section 27A of the Securities Act and Section 27E of the Exchange Act. Such statements include, without limitation, statements regarding the future results of operations, performance and achievements of the Company, including potential property acquisitions, the timing, content, cost and results of proposed work programs, the discovery and delineation of mineral deposits/resources/reserves, geological interpretations, proposed production rates, potential mineral recovery processes and rates, business and financing plans, business trends and future operating revenues. Although the Company believes that such statements are reasonable, it can give no assurance that such expectations will prove to be correct. Forward-looking statements are typically identified by words such as: believe, expect, anticipate, intend, estimate, postulate and similar expressions, or are those, which, by their nature, refer to future events. The Company cautions investors that any forward-looking statements by the Company are not guarantees of future results or performance, and that actual results may differ materially from those in forward looking statements as a result of various factors, including, but not limited to, variations in the nature, quality and quantity of any mineral deposits that may be located, significant downward variations in the market price of any minerals produced, the Company's inability to obtain any necessary permits, consents or authorizations required for its activities, to produce minerals from its properties successfully or profitably, to continue its projected growth, to raise the necessary capital or to be fully able to implement its business strategies. All of the Company's public disclosure filings may be accessed via www.sedar.com and readers are urged to review these materials, including the technical reports filed with respect to the Company's mineral properties, and particularly the September 7, 2018 NI 43-101 technical report prepared by SRK Consulting (Canada) Inc. with respect to the Platosa Property. This press release is not to be construed in any way as, an offer to buy or sell securities in the United States. 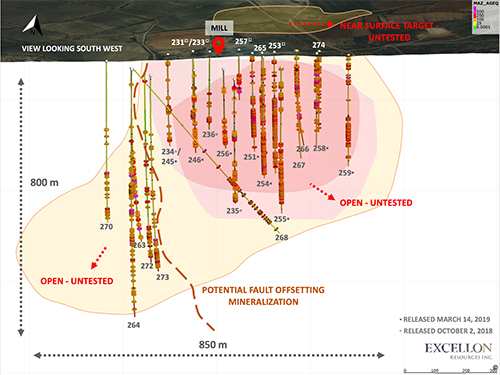 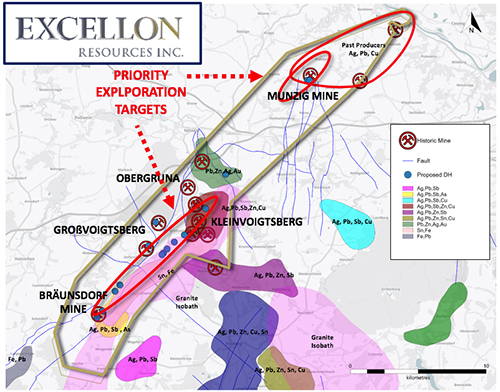