“Exploration at Platosa continues to deliver compelling targets at a mine and regional level,” stated Ben Pullinger, SVP Geology & Corporate Development. “We are currently drilling regional discovery targets, with the Jaboncillo alteration zone representing a potentially larger-scale Platosa-style deposit and the PDN geophysical anomaly potentially representing a skarn-body associated with our Rincón del Caído discovery in 2012.  Additionally, we continue to define the new 10-20 target, just south of the Mine, which has the potential to significantly increase the mineralized footprint at Platosa.”

Drilling is currently ongoing at Jaboncillo where the Company intersected gossans in 12 of 20 drill holes in 2019. Petrographic analysis conducted on samples from these gossans subsequently confirmed the presence of relict base metal sulphides as well as silver species within the oxidized intervals. These gossans were intersected over a strike length of 1.2 kilometres and represent the emplacement of a large hydrothermal system in this area. This program is targeting the source of these gossans and the possible discovery of massive sulphides at this target. 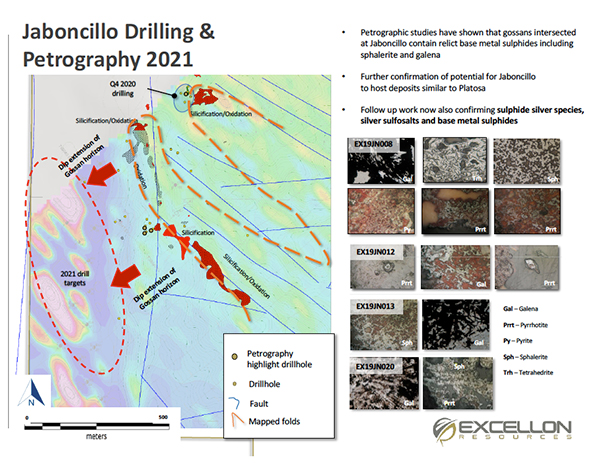 Underground drilling at the Platosa Mine continues to define mineralization ahead of mine development and add mineralized inventory in areas not adequately tested by surface drilling. The ongoing program follows up on previous drilling of the Pierna and NE-1 mantos and depth extensions of the 623 and NE-1S mantos. Previously released results from this program (see press releases of January 24, 2019 and February 1, 2021) include:

Results from this program will be released periodically over the coming months.

In late 2020, the Company conducted drilling on the 10-20 target from surface, 250 metres south of the high-grade 623 Manto along a northwest trending structure. Exploration drilling on this structure in 2018 and 2019 encountered high-grade results expanding the NE-1 South Manto, which remains open. Drilling followed up on sulphide veinlets and breccias encountered in 2018 drilling, which returned 2.6% lead and are believed to be related to proximal massive sulphide mineralization. Recent drilling encountered 2.76 metres of 69 g/t AgEq, including 1.32 metres of 129 g/t AgEq in EX20LP1167. Most significantly, the 10-20 target is structurally related to results encountered in recent underground drilling in the Gap Zone, a zone of vertical mineralization inadequately tested with vertical holes drilled from surface, which provides a significant opportunity to add mineralization over approximately 300 metres of strike with a vertical extent of 30-40 metres. This zone has the potential to significantly increase the current, 600x800-metre mineralized footprint of the Platosa Mine.

Mr. Ben Pullinger, P.Geo., Senior Vice President Geology & Corporate Development, has acted as the Qualified Person, as defined in NI 43-101, with respect to the disclosure of the scientific and technical information contained in this press release.

Excellon’s vision is to create wealth by realizing strategic opportunities through discipline and innovation for the benefit of our employees, communities and shareholders. The Company is advancing a precious metals growth pipeline that includes: Platosa, Mexico’s highest-grade silver mine since production commenced in 2005; Kilgore, a high quality gold development project in Idaho with strong economics and significant growth and discovery potential; and an option on Silver City, a high-grade epithermal silver district in Saxony, Germany with 750 years of mining history and no modern exploration. The Company also aims to continue capitalizing on current market conditions by acquiring undervalued projects.

The Toronto Stock Exchange has not reviewed and does not accept responsibility for the adequacy or accuracy of the content of this Press Release, which has been prepared by management. This press release contains forward-looking statements within the meaning of Section 27A of the Securities Act and Section 27E of the Exchange Act. Such statements include, without limitation, statements regarding mineral resources estimates, the future results of operations, performance and achievements of the Company, including potential property acquisitions, the timing, content, cost and results of proposed work programs, the discovery and delineation of mineral deposits/resources/reserves, geological interpretations, proposed production rates, potential mineral recovery processes and rates, business and financing plans, business trends and future operating revenues. Although the Company believes that such statements are reasonable, it can give no assurance that such expectations will prove to be correct. Forward-looking statements are typically identified by words such as: believe, expect, anticipate, intend, estimate, postulate and similar expressions, or are those, which, by their nature, refer to future events. The Company cautions investors that any forward-looking statements by the Company are not guarantees of future results or performance, and that actual results may differ materially from those in forward looking statements as a result of various factors, including, but not limited to, variations in the nature, quality and quantity of any mineral deposits that may be located, significant downward variations in the market price of any minerals produced, the Company's inability to obtain any necessary permits, consents or authorizations required for its activities, to produce minerals from its properties successfully or profitably, to continue its projected growth, to raise the necessary capital or to be fully able to implement its business strategies. All of the Company's public disclosure filings may be accessed via www.sedar.com and readers are urged to review these materials. This press release is not, and is not to be construed in any way as, an offer to buy or sell securities in the United States.

Cautionary Note to U.S. Investors: The terms “mineral resource,” “measured mineral resource,” “indicated mineral resource” and “inferred mineral resource,” as used on Excellon’s website and in its press releases are Canadian mining terms that are defined in accordance with National Instrument 43-101 – Standards of Disclosure for Mineral Projects (“NI 43-101”). These Canadian terms are not defined terms under United States Securities and Exchange Commission (“SEC”) Industry Guide 7 and are normally not permitted to be used in reports and registration statements filed with the SEC by U.S. registered companies.  The SEC permits U.S. companies, in their filings with the SEC, to disclose only those mineral deposits that a company can economically and legally extract or produce. Accordingly, note that information describing the Company’s “mineral resources” is not directly comparable to information made public by U.S. companies subject to reporting requirements under U.S. securities laws. U.S. investors are urged to consider closely the disclosure in the Company’s Form 40-F which may be secured from the Company, or online at http://www.sec.gov/edgar.shtml.