Toronto, Ontario - April 25, 2013 - Excellon Resources Inc. (TSX:EXN) ("Excellon" or "the Company"),Â Mexico's highest grade silver producer, is pleased to report the remainder of the results from the recently completed fall and winter diamond drilling programs on the company's Beschefer and DeSantis properties, both located in the prolific Abitibi Greenstone Belt of Northeastern Ontario and Northwestern Quebec. The programs followed up on known mineralization as well as investigating previously untested geophysical anomalies and regional geological targets. Significant intersections released today include:

"The final assays from our Canadian winter drilling programs provide additional evidence of the potential of both Beschefer and DeSantis to host economic gold deposits," stated John Sullivan, Vice-President of Exploration. "Beschefer's B14 Zone holes have demonstrated very good widths and the zone has been extended to depth. At DeSantis we have discovered the new 16B Zone a considerable distance into the footwall from previously known mineralization. This zone remains open in all directions, most importantly from its discovery point at 1,050 m vertical to surface. Mr. Sullivan continued, "With these encouraging results in hand our geologists have begun compiling and modelling the geology and mineralization on both projects for follow-up drilling programs in the future."

Beschefer Project
The Beschefer Project is located in northwestern Quebec, 12 kilometres ("km") east of the past-producing Selbaie mine and 80 km east-southeast of the recently commissioned Detour Gold Mine. The 2013 program consisted of 16 diamond drill holes totaling 6,668 m. The primary focus of this drilling was to follow up on results from the B-14 Zone, an intensely sheared and strongly sericite-, ankerite-, hematite-altered and sulphide-bearing deformation zone, which trends in a northeast-southwest direction across the property.

Post drilling activities will involve a detailed review of the results to prepare for and plan the next phase of drilling.

DeSantis Project
The DeSantis Project is located 4.5 km southwest of Timmins, Ontario in the heart of the Timmins gold camp. The fall-2012/winter-2013 diamond drilling program consisted of 18 holes totaling 6,686 m aimed at testing the down-dip extension of the Albitite Zone and untested geophysical and geological targets elsewhere on the property.

Assay results have now been received for all holes completed during the recent drill campaign. . Previously unreleased results reported today areÂ 3.26 g/t Au over 1.25 mÂ in DS13-011, which intersected quartz vein bearing pyritic, ankerite and sericite altered mafic volcanics. These veined and altered mafic volcanics are interpreted to be the east strike extension of the vein system that hosts the historic McEnaney Veins.

Based on these promising results the Company elected to exercise its option to earn the remaining 49% of the DeSantis property and has issued 540,000 common shares of Excellon to International Prospectors and Explorers Inc. ("IEP"). This was the final obligation under the terms of the 2010 option agreement between Lateegra Gold Corp. and IEP. The Company now holds a 100% interest, subject to a Net Smelter Returns ("NSR") royalty ranging from 1.5% to 3.5% by portion of the original DeSantis property. In addition in mid-April the Company issued 48,600 shares and made a payment of C$20,000 to a group of three Timmins area prospectors and thereby earned a 100% interest, subject to a 2% NSR royalty, in the contiguous DeSantis West property. The Company has the option to buyout portions of each of the NSRs.

A table of assay results for both projects and explanatory maps are found below. 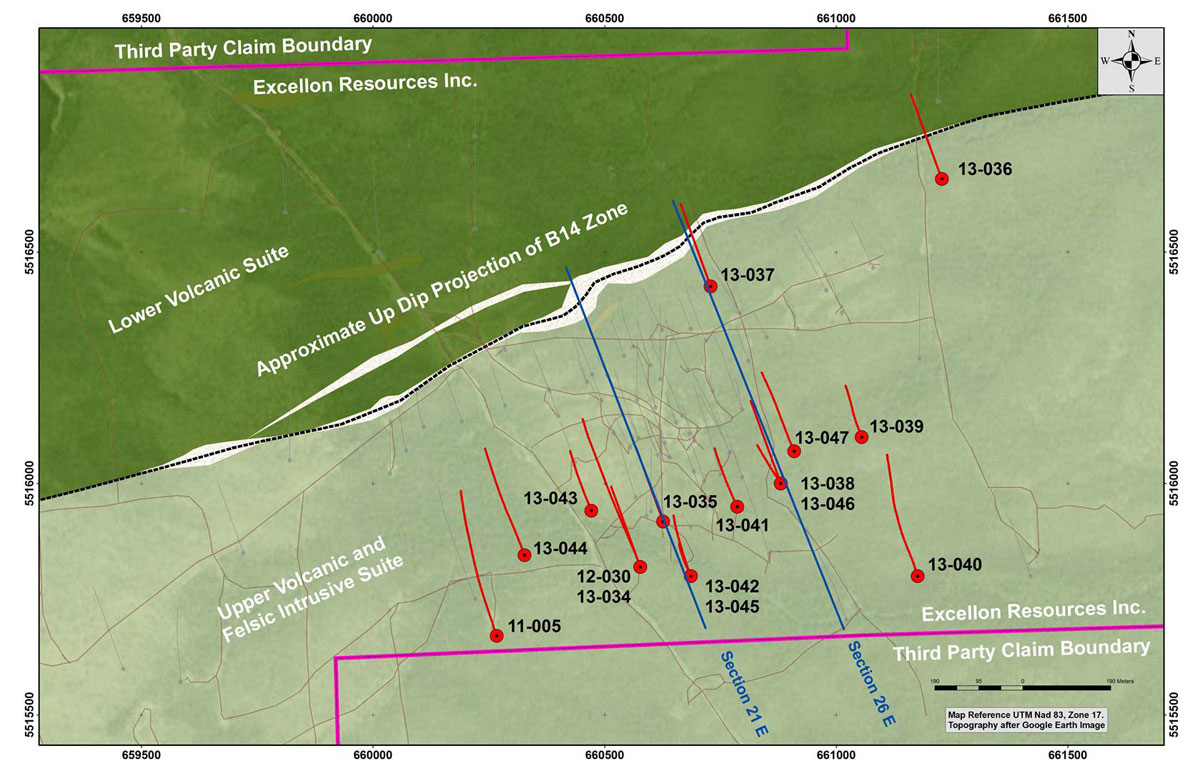 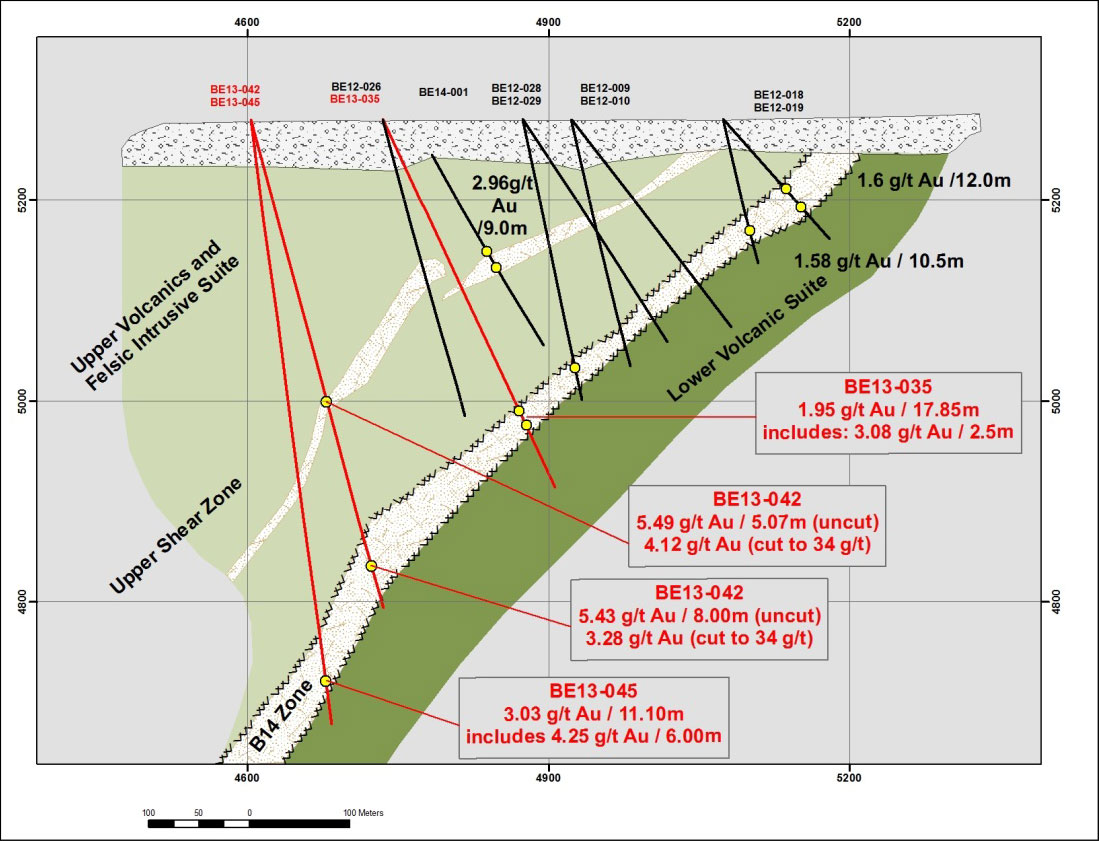 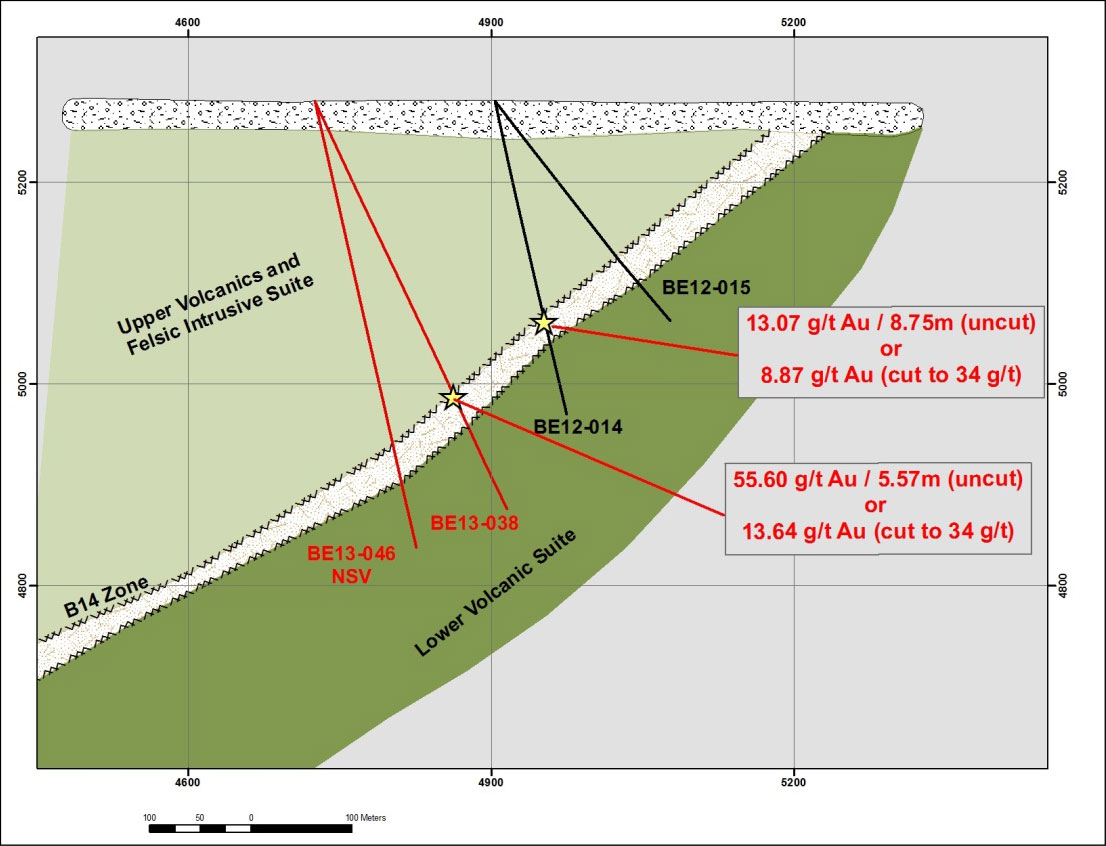 Quality Control
Excellon Resources has a comprehensive quality-control program in place for its Canadian projects to ensure best practice in the sampling and analysis of drill core. This program is managed by, Stephen Conquer one of the project Qualified Persons. Drill core samples are prepared and analyzed by ALS Minerals at either of its Vancouver, B.C. or Val d'Or, QC ISO/IEC 17025:2005 accredited laboratories.

About Excellon
An Evolution in High Grade Silver: Excellon's 100%-owned La Platosa Mine in Durango is Mexico's highest grade silver mine, with lead and zinc by-products making it one of the lowest cash cost silver mines in the country. The Company is positioning itself to capitalize on undervalued projects by focusing on increasing La Platosa's profitable silver production and near term mineable resources.

Disclaimer:
The Toronto Stock Exchange has not reviewed and does not accept responsibility for the adequacy or accuracy of the content of this Press Release, which has been prepared by management. This press release contains forward-looking statements within the meaning of Section 27A of the Securities Act and Section 27E of the Exchange Act. Such statements include, without limitation, statements regarding the future results of operations, performance and achievements of the Company, including potential property acquisitions, the timing, content, cost and results of proposed work programs, the discovery and delineation of mineral deposits/resources/reserves, geological interpretations, proposed production rates, potential mineral recovery processes and rates, business and financing plans, business trends and future operating revenues. Although the Company believes that such statements are reasonable, it can give no assurance that such expectations will prove to be correct. Forward-looking statements are typically identified by words such as: believe, expect, anticipate, intend, estimate, postulate and similar expressions, or are those, which, by their nature, refer to future events. The Company cautions investors that any forward-looking statements by the Company are not guarantees of future results or performance, and that actual results may differ materially from those in forward looking statements as a result of various factors, including, but not limited to, variations in the nature, quality and quantity of any mineral deposits that may be located, significant downward variations in the market price of any minerals produced [particularly silver], the Company's inability to obtain any necessary permits, consents or authorizations required for its activities, to produce minerals from its properties successfully or profitably, to continue its projected growth, to raise the necessary capital or to be fully able to implement its business strategies. All of the Company's public disclosure filings may be accessed via www.sedar.com and readers are urged to review these materials, including the technical reports filed with respect to the Company's mineral properties, and particularly the November 22, 2011 NI 43-101-compliant technical report prepared by Roscoe Postle Associates Inc. with respect to the Platosa Property. This press release is not, and is not to be construed in any way as, an offer to buy or sell securities in the United States.