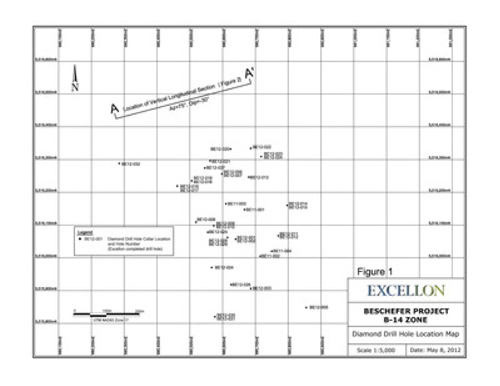 The Company's 2012 winter diamond drilling campaign on the Beschefer Project was conducted between January and the end of March. A total of 8,867 metres were drilled in 33 holes, which focused on expansion of the previously discovered "B-14 Zone," as well as testing other exploration targets on the property. The Beschefer Project is located 12 km east of the past-producing Selbaie Mine and 60 km northeast of the Casa Berardi Mine within predominantly intermediate to felsic volcanic rocks of the Harricana-Turgeon volcanic belt of the Brouillan volcanic complex. Previous drilling results within the B-14 Zone included the interception of 12.4 gpt Au over 3.78 m including 63.5 gpt Au over 0.43 m in hole BE11-003, returned in the 2011 drilling campaign. In a press release dated April 17, 2012, the Company disclosed that hole BE12-014 had intersected 13.07 gpt Au over 8.75 m including 58.5 gpt Au over 1.50 m.

All significant assay results for the Company's 2012 drill program (including those previously disclosed) are summarized in the following table and all analytical results are now complete except routine check analyses.

Note: Gold grades are uncut; intercept lengths may not be representative of true thicknesses.

Gold mineralization was discovered in the B-14 Zone in 1995 by Billiton Canada Inc. and since that time and prior to the Company's involvement, has seen limited exploration. The gold mineralization is typical of other shear zone hosted mesothermal gold deposits in that it is hosted within mylonite, highly sheared and altered rock, which also contains increased quartz veining and pyrite.

Drill hole locations can be referenced on the accompanying Figure 1 and also on an inclined longitudinal section through the mid-point of the B-14 Zone, Figure 2. Drill holes BE12-032 and BE12-033 tested exploration targets outside the area of the B-14 Zone. The above-reported geological and analytical results continue to be consistent with those previously encountered for the B-14 Zone with the zone persisting as a moderately dipping shear zone marked by increased sericite and carbonate alteration, quartz veining, and pyrite hosted by mylonite. Gold content is generally proportional to sulphide content and the highest sulphide content is generally found at locations of highest deformation and alteration due to shearing, i.e., in the most well developed mylonite.

Excellon is compiling all geotechnical data and assessing the potential of the B-14 Zone with geological and mineralization modelling. Future plans for the project will be formulated based on the results.

Drilling, Assaying and QA/QC
The Company's exploration programs are subject to QA/QC and security programs, which conform to industry standard best practices and are in compliance with NI 43-101.

The winter 2012 diamond drill program on the Beschefer Project was conducted by N.P.L.H. Drilling of Timmins, Ontario. Analytical work is being performed by ALS Chemex Ltd., an ISO 9001-200 registered laboratory with internal QA/QC procedures. Excellon utilizes, as part of its QA/QC program, the insertion of standard reference materials and blank samples representing approximately 5% of the total sample population. Drill core is sampled according to standardized technical procedures, which include the core being split in half with half of the core being retained, while the other half is sampled for gold analysis via Fire Assay - Atomic Absorption Spectroscopy finish using a 50 gram assay aliquot. Intervals where visible gold has been identified are analyzed via gravimetric or screened metallic procedures. Samples are securely packed for shipment utilizing security seals noted on Chain of Custody documents, which are confirmed as intact upon receipt at ALS's sample receiving facility.

Qualified Person
Excellon's Canadian exploration programs are conducted under the supervision of its Vice President of Exploration for Canada, Ms. Heather Miree, P. Geo. Ms. Miree is a Qualified Person as defined by NI 43-101, and has prepared or supervised the preparation of the scientific or technical information in this press release and has verified the data contained herein.

Ms. Miree is an economic geologist with over 25 years of experience in the mineral industry. Ms. Miree has held senior geological and supervisory roles with several junior and mid-sized mining companies, in the areas of exploration and operations. Ms. Miree is not independent of Excellon as she is an officer of the Company.

Other information:
Ms. Heather Miree, VP of Exploration, Canada has resigned from Excellon Resources, effective May 18, 2012. We wish Ms. Miree the best in her future endeavours and thank her for her valuable contribution to Excellon's Canadian exploration program. Mr. John Sullivan, Excellon's VP of Exploration, Mexico will oversee the Canadian program going forward.

About Excellon
Excellon, a mineral resource company operating in Durango and Zacatecas States, Mexico, and Ontario and Quebec, Canada, is committed to building value through production, expansion and discovery. Excellon is Mexico's highest-grade silver producer; it produces silver, lead and zinc from the high-grade manto Mineral Resource on its large, 100% owned Platosa Property, strategically located in the middle of the Mexican CRD/silver belt. Excellon's focus is on expanding its operating capacity and increasing its Mineral Resources at Platosa where an exploration program focused on diamond drilling and advanced geophysical techniques is ongoing. The Platosa Property, not fully explored, has several geological indicators of a large mineralized system. The Miguel Auza Mill Operation in Zacatecas also has 41,000 hectares of underexplored land. Excellon also has ongoing gold exploration programs on the DeSantis Project, located near Timmins, Ontario and the Beschefer Project, located in northwestern Quebec. Both these projects host gold mineralization and significant potential for the discovery of more. Excellon will continue to use cash from operations to fund its ongoing exploration activities.

Disclaimer
The Toronto Stock Exchange has not reviewed and does not accept responsibility for the adequacy or accuracy of the content of this Press Release, which has been prepared by management. Except for statements of historical fact relating to the Company, this press release contains "forward-looking statements" within the meaning of applicable Canadian securities legislation and applicable U.S. securities laws. Such forward-looking statements include, without limitation, statements regarding business and financing plans pertaining to assessment of the economic potential of the Beschefer property, the Company's focus on expanding its operating capacity and the ongoing exploration programs at Platosa, the ongoing exploration programs at the DeSantis and Beschefer projects, the potential for the further discovery of mineral deposits/resources and geological interpretations. Forward-looking statements are made based on management's beliefs, estimates, assumptions, plans, intentions and opinions on the date the statements are made. Although the Company believes that such statements are reasonable, it can give no assurance that such expectations will prove to be correct and the Company undertakes no obligation to update such forward-looking statements, except as may be required by law. Forward-looking statements are typically identified by words such as: believe, expect, anticipate, intend, estimate, postulate and similar expressions, or are those, which, by their nature, refer to future events. The Company cautions investors that any forward-looking statements by the Company are not guarantees of future results or performance, and that actual results may differ materially from those in forward-looking statements as a result of various risk factors, including, but not limited to, variations in the nature, quality and quantity of any mineral deposits that may be located, significant downward variations in the market price of any minerals produced (particularly silver), the Company's inability to obtain any necessary permits, consents or authorizations required for its activities, to produce minerals from its properties successfully or profitably, to continue its projected growth, to raise the necessary capital or to be fully able to implement its business strategies. A description of the risk factors applicable to the Company can be found in the Company's most recent Annual Information Form under "Description of the Business - Risk Factors". All of the Company's public disclosure filings may be accessed via www.sedar.com and readers are urged to review these materials, including the technical reports filed with respect to the Company's mineral properties, and particularly the November 22, 2011 NI 43-101-compliant technical report prepared by Roscoe Postle Associates Inc. with respect to the Platosa Property. This press release is not, and is not to be construed in any way as, an offer to buy or sell securities in the United States.

Cautionary Note to United States Investors regarding Adjacent or Similar Properties
This press release may also contain information with respect to similar or adjacent mineral properties in respect of which the Company has no interest or rights to explore or mine. The Company advises United States investors that the U.S. Securities and Exchange Commission's mining guidelines strictly prohibit information of this type in documents filed with the SEC. Readers are cautioned that the Company has no interest in or right to acquire any interest in any such properties, and that mineral deposits on adjacent or similar properties are not indicative of mineral deposits on the Company's properties. 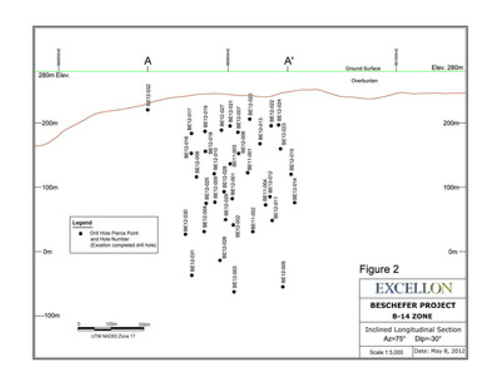