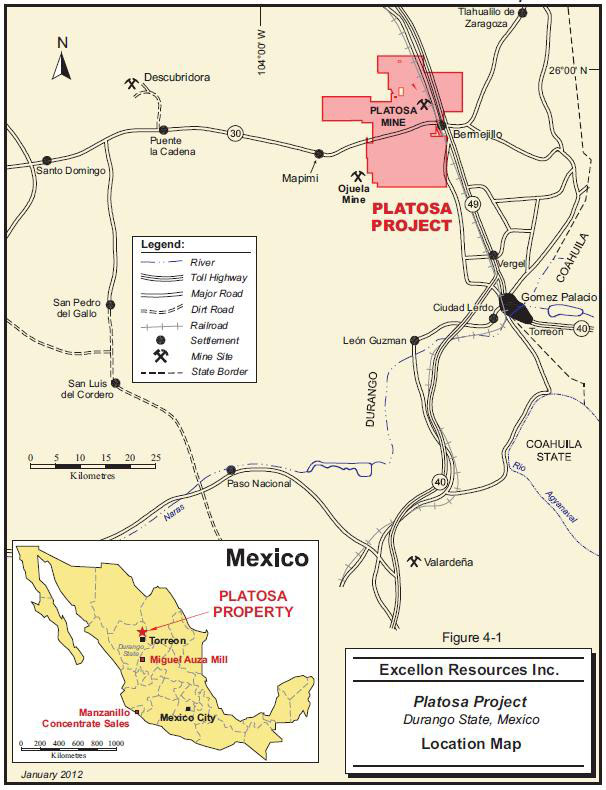 "The combination of skarn, gold, bismuth, felsic dykes and the highly siliceous granite porphyry is a strong indication that we are approaching the large-tonnage CRD-Source that is the primary goal of the Company's exploration program at Platosa," stated John Sullivan, Vice-President of Exploration. "We are also excited about the long-contemplated possibility of finding more near-surface manto-style mineralization related to the structures that channeled fluids from a deep source into the upper limestones. The corridor between Rincón and the Platosa Mine has seen very little drilling and virtually none of it has reached the marble unit that hosts the Rincón skarn-sulphide intersections. The potential of this area for both additional manto and Source mineralization remains untapped."

* All three holes were drilled vertical and intervals are core widths. Mineralization banding lies at highly variable angles to core axes in all three holes (as is typical of skarn-related sulphide mineralization) and data points remain sparse. Further geometric information is required to estimate true thicknesses.

The new mineralization is developed in a marbleized limestone sequence located beneath the thick hornfelsed shale unit that underlies the dolomitized limestones hosting the Platosa Mantos (Map 3). Relatively pristine marble extends for tens of metres below the skarn and all holes bottom in high-silica, crowded granite porphyry containing small amounts of pyrite located at approximately 800 m vertical depth. Several of the sulphide intercepts surround pervasively sericitized felsic dykes. The orientation of the mineralized skarn cannot yet be determined, but the pattern of intersections suggests strong structural control. This control may be reflected by the numerous high-angle structures that cut the overlying rock units in all holes. These structures are being carefully sampled to determine if one of them was the pathway along which mineralizing fluids escaped from beneath the hornfels into the upper, manto-hosting limestone units.

The mineralization demonstrates multi-stage, pyrite-rich, massive to semi-massive textures that clearly overprint earlier pyroxene and garnet-rich skarn. Mineralization is concentrated at or near marble-hornfels contacts. The multi-stage characteristics are similar to those shown by the sulphides being mined from the Platosa mantos, although there are distinct compositional differences reflected by much higher pyrite content, the appearance of chalcopyrite and much darker-coloured sphalerite. The consistently anomalous gold, bismuth (8,280 ppm over 1.0 m in LP1023A and 1,685 ppm over 2.6 m in LP1024) and copper (0.23% over 1.1 m in LP1024 and 0.12% over 8.1 m in LP1025) combined with the overall skarn mineralogy indicate that this area is still somewhat distal to the Source itself, but may lie along a feeder system leading from the Source. The Source may lie between Rincón and the high-grade Platosa mantos currently in production, or farther to the northwest. Given the high pyrite content of the skarn, the mineralization may respond to electrical geophysical methods, and downhole geophysical surveying is underway to gather orientation data to guide further drilling. In the interim all four exploration drills are concentrated at Rincón.

Removal of Illegal Protesters
All remaining illegal protesters at La Platosa have been removed and/or dispersed by the Sindicato Nacional Minero Metalúrgico Napoleón Gómez Sada, which was elected by the workers of La Platosa in a government sanctioned union election in early July, with the support of the Concerned Women of Bermejillo, a group of women from the local communities of Bermejillo and Mapimi whose livelihoods were threatened by the ongoing disruptions at the mine. Excellon is currently in full production at La Platosa and has resumed shipments to the Company's mill at Miguel Auza, Zacatecas. An updated production forecast for the remainder of 2012 will be released in due course.