Toronto, Ontario – December 14, 2017 – Excellon Resources Inc. (TSX:EXN, EXN.WT and EXN.WT.A; OTC:EXLLF) ("Excellon" or the “Company") is pleased to announce the commencement of an extensive surface exploration program on the 21,000-hectare Platosa Property in Durango, Mexico targeting further extensions to the Platosa Mine system and new manto and skarn discoveries. The program is planned to include:

“The upcoming exploration program is founded on a back-to-basics review and reanalysis of the large historical database of geophysics, geochemistry and drilling on the Platosa Property,” stated Ben Pullinger, Vice President Geology. “This analysis has already successfully identified new prospective targets at Jaboncillo and San Gilberto, which have been confirmed by field mapping. We are confident that this methodology and the improved understanding of the regional system surrounding the Platosa Mine will lead to positive exploration results in 2018. We are also pleased to have the funding secured to execute this comprehensive exploration program as we explore for new manto and skarn discoveries on one of Mexico’s most prospective mineral belts.”

Defining Additional Tonnage at the Platosa Mine

Drilling has been ongoing from a dedicated drill drift over the high-grade 623 Manto since late October, with this phase of the program designed to delineate additional mineralization around the periphery and to depth on the manto. Following completion of this phase of drilling in Q1 2018, the underground program will focus on further delineating the connection between the Pierna and Rodilla Mantos and subsequently focus on expanding the Pierna Manto laterally to the south and to depth. The Company expects to release further results from this program in Q1 2018.

The Company has also completed a comprehensive reprocessing and review of geophysical data and a property-wide re-interpretation of the structural and lithological controls for mineralization at Platosa. Through this process, the Company has generated numerous targets based on geology, chemistry, structure and geophysics that will be tested throughout 2018. Priority drill targets in this program include:

Exploring for More Platosa-style Deposits on the Platosa Property

Over the last 12 months, in addition to surface and underground drilling, the Company has reinitiated fundamental exploration of the Platosa Property, including focused mapping and prospecting at Saltillera North and Jaboncillo, six kilometres and 11 kilometres northwest of the Platosa Mine, respectively. Both targets continue to return anomalous results for silver and base metals over growing strikes of 600 metres and 1,100 metres, respectively. The Company believes these results to be indicative of the alteration profile associated with an underlying and structurally influenced mineralizing system. This work and results provided the foundation for targeting the soil geochemistry surveys that commenced in the Q4 2017, which will be followed by geophysical campaigns in the first half of 2018. The Company expects to define new drill targets from these surveys to be tested in the second half of 2018.

San Gilberto is a newly developing target located 13 kilometres south of the Platosa Mine, which was identified through gravity and magnetic analyses. This target will be progressed further with surface prospecting and, likely, IP surveying later in 2018. 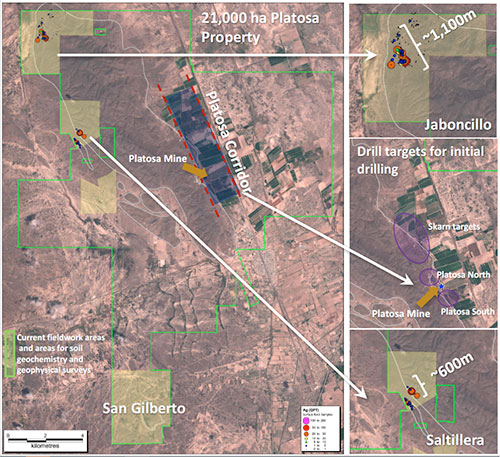 Appointment to Board of Directors

The Company is also pleased to announce the appointment of Andrew Farncomb to its Board of Directors. Mr. Farncomb is a founder of Cairn Merchant Partners LP, a merchant bank focused on advisory and principal investing. He has extensive experience advising public and private companies on mergers, acquisitions and financing transactions. He is a founder and director of Contact Gold Corp., an advanced stage Nevada gold exploration company, a board member of several other TSX Venture Exchange listed companies and a board member and Chair of the Investment Committee at the Flavelle Family Foundation. Mr. Farncomb was formerly a Partner and Investment Banking professional at Paradigm Capital Inc., a Canadian investment dealer, and graduated from Smith School of Business at Queen's University with a Bachelor of Commerce (Honours) degree.

“Andrew brings extensive capital markets experience and a broad perspective to the Board.  We look forward to Andrew’s contributions in the coming years,” stated André Fortier, Chairman.

Geological Description of the Platosa Property

The Platosa mineral resource sits under approximately 56-hectares of the 21,000-hectare Platosa Property and comprises a series of linked high-grade massive sulphide, silver-lead-zinc manto deposits on the periphery of an under-explored Carbonate Replacement Deposit (“CRD”) system. CRDs are epigenetic, intrusion-related, high-temperature, sulphide-dominant, lead-zinc-silver-copper-gold-rich deposits that commonly occur in clusters associated with major regional geologic features. The Mexican CRD Belt is perhaps the world's best-developed CRD cluster and Platosa lies in the centre of the northwest-southeast-trending axis of the largest deposits of the belt.

CRD orebodies take the form of lenses or elongate to elongated-tabular bodies referred to as mantos or chimneys depending on whether they are horizontal or steeply inclined. A spectrum of CRD orebodies exists, ranging from distal manto and medial chimney massive sulphide bodies to proximal sulphide-rich skarns associated with unmineralized or porphyry-type intrusive bodies.

Historically, manto exploration has focused on areas within 1.5 km of the Platosa Mine. Outside of the immediate resource area drilling has been limited, but has consistently encountered the favourable heterolithic fragmental limestone unit that hosts all the high-grade massive sulphide mineralization discovered to date at Platosa. There is excellent potential to continue to discover new mantos as the deposit area is open to the north, northeast, east and southeast of the known mantos.

Mr. Ben Pullinger, P. Geo, Vice-President Geology, has acted as the Qualified Person, as defined in NI 43-101, with respect to the disclosure of the scientific and technical information relating to exploration results contained in this press release.

Excellon’s 100%-owned Platosa Mine in Durango has been Mexico’s highest-grade silver mine since production commenced in 2005. The Company is focused on optimizing the Platosa Mine’s cost and production profile, discovering further high-grade silver and carbonate replacement deposit (CRD) mineralization on the Platosa Project and epithermal silver mineralization on the Miguel Auza Property and capitalizing on the opportunity in current market conditions to acquire undervalued projects in Latin America.

The Toronto Stock Exchange has not reviewed and does not accept responsibility for the adequacy or accuracy of the content of this Press Release, which has been prepared by management. This press release contains forward-looking statements within the meaning of Section 27A of the Securities Act and Section 27E of the Exchange Act. Such statements include, without limitation, statements regarding the future results of operations, performance and achievements of the Company, including potential property acquisitions, the timing, content, cost and results of proposed work programs, the discovery and delineation of mineral deposits/resources/reserves, geological interpretations, proposed production rates, potential mineral recovery processes and rates, business and financing plans, business trends and future operating revenues. Although the Company believes that such statements are reasonable, it can give no assurance that such expectations will prove to be correct. Forward-looking statements are typically identified by words such as: believe, expect, anticipate, intend, estimate, postulate and similar expressions, or are those, which, by their nature, refer to future events. The Company cautions investors that any forward-looking statements by the Company are not guarantees of future results or performance, and that actual results may differ materially from those in forward looking statements as a result of various factors, including, but not limited to, variations in the nature, quality and quantity of any mineral deposits that may be located, significant downward variations in the market price of any minerals produced [particularly silver], the Company's inability to obtain any necessary permits, consents or authorizations required for its activities, to produce minerals from its properties successfully or profitably, to continue its projected growth, to raise the necessary capital or to be fully able to implement its business strategies. All of the Company's public disclosure filings may be accessed via www.sedar.com and readers are urged to review these materials, including the technical reports filed with respect to the Company's mineral properties, and particularly the July 9, 2015 NI 43-101-compliant technical report prepared by Roscoe Postle Associates Inc. with respect to the Platosa Property. This press release is not, and is not to be construed in any way as, an offer to buy or sell securities in the United States.