Toronto, Ontario – February 22, 2018 – Excellon Resources Inc. (TSX:EXN, EXN.WT, EXN.WT.A; OTC:EXLLF) ("Excellon" or the “Company") is pleased to announce results from its ongoing underground exploration program at the Platosa Mine in Durango, Mexico.

The following table shows highlighted intervals from the current definition and infill program being conducted from underground at Platosa:

The results announced today complement underground drilling in the 623 and Guadalupe South connector/expansion zone completed earlier in 2017 and late 2016 (see press releases dated October 27, 2016, July 26, 2017 and September 6, 2017), with previously announced results from the zone including:

Drilling underground has focused on the definition of the 623 Manto and has now moved to a newly prepared drill bay to focus on expansion drilling of the Pierna and Rodilla Mantos. Additional drilling in these areas will test the down dip and strike length continuity of the Rodilla and Pierna mantos along a structural feature where the two mantos are offset. The Company aims to delineate additional tonnes in this location, similar to the drilling program around the 623 Manto. The Company is currently producing from the 623, Pierna, Rodilla and Guadalupe South Mantos.

Drilling in 674 also identified additional mineralization above the water table in an area accessible from existing workings. The Company is evaluating this area for near-term production.

Platosa drill core samples are prepared and assayed by SGS Minerals Services in Durango, Mexico. The lab is accredited to ISO/IEC 17025. The Company has a comprehensive QA/QC program, supervised by an independent Qualified Person. 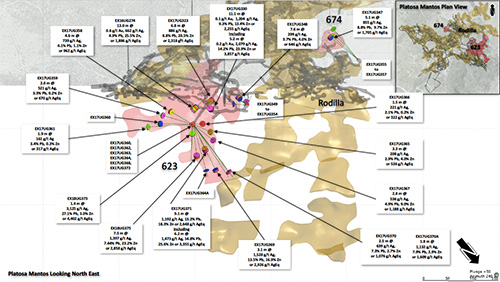 Surface drilling continues with a drill rig currently testing targets in the same target horizon that hosts the Platosa Mine within the north-south trending Platosa corridor. The Company intends to continue testing priority targets within this corridor while continuing to define new targets at Jaboncillo, PDN, Saltillera North and South and San Gilberto through its ongoing fieldwork program.

Mr. Ben Pullinger, P. Geo, Vice-President Geology, has acted as the Qualified Person, as defined in NI 43-101, with respect to the disclosure of the scientific and technical information relating to exploration results contained in this press release.

Excellon’s 100%-owned Platosa Mine in Durango has been Mexico’s highest-grade silver mine since production commenced in 2005. The Company is focused on optimizing the Platosa Mine’s cost and production profile, discovering further high-grade silver and CRD mineralization on the Platosa Project and capitalizing on the opportunity in current market conditions to acquire undervalued projects in Latin America.

The Toronto Stock Exchange has not reviewed and does not accept responsibility for the adequacy or accuracy of the content of this Press Release, which has been prepared by management. This press release contains forward-looking statements within the meaning of Section 27A of the Securities Act and Section 27E of the Exchange Act. Such statements include, without limitation, statements regarding the future results of operations, performance and achievements of the Company, including potential property acquisitions, the timing, content, cost and results of proposed work programs, the discovery and delineation of mineral deposits/resources/reserves, geological interpretations, proposed production rates, potential mineral recovery processes and rates, business and financing plans, business trends and future operating revenues. Although the Company believes that such statements are reasonable, it can give no assurance that such expectations will prove to be correct. Forward-looking statements are typically identified by words such as: believe, expect, anticipate, intend, estimate, postulate and similar expressions, or are those, which, by their nature, refer to future events. The Company cautions investors that any forward-looking statements by the Company are not guarantees of future results or performance, and that actual results may differ materially from those in forward looking statements as a result of various factors, including, but not limited to, variations in the nature, quality and quantity of any mineral deposits that may be located, significant downward variations in the market price of any minerals produced [particularly silver], the Company's inability to obtain any necessary permits, consents or authorizations required for its activities, to produce minerals from its properties successfully or profitably, to continue its projected growth, to raise the necessary capital or to be fully able to implement its business strategies. All of the Company's public disclosure filings may be accessed via www.sedar.com and readers are urged to review these materials, including the technical reports filed with respect to the Company's mineral properties, and particularly the July 9, 2015 NI 43-101-compliant technical report prepared by Roscoe Postle Associates Inc. with respect to the Platosa Property. This press release is not, and is not to be construed in any way as, an offer to buy or sell securities in the United States.