Toronto, Ontario – October 30, 2018 – Excellon Resources Inc. (TSX:EXN and EXN.WT.A; OTC:EXLLF) ("Excellon" or the “Company") is pleased to announce a significant increase in the Company’s land position around the Miguel Auza property in Zacatecas, Mexico.

“We’re excited to start working on the Evolución concession, which is the product of extensive preparation over the past year,” stated Ben Pullinger, SVP Geology. “Looking under cover for blind deposits is the evolution of exploration in Mexico, with Hecla’s San Sebastian deposit illustrating this potential just north of us. We will shortly commence a regional mapping and geochemical program to develop exploration zones and drill targets.”

The consolidated Evolución land package is located on the northeast trend of the Fresnillo silver belt, southeast of Hecla’s San Sebastián deposit. The property straddles the crustal-scale break between the Central Terrane and the basement units in this area. This break is prospective for mineral exploration along the trend.

As announced in a press release dated October 2, 2018, initial drilling to the south at Miguel Auza has already confirmed potential in the area, with broad mineralized intersections of anomalous gold, silver and base metal concentrations including discrete higher-grade zones of carbonate veining, bladed calcite and silica with associated galena, sphalerite and pyrite. This mineralization is typical of the Fresnillo silver trend. Drilling is ongoing on multiple targets that remain open along strike and at depth.

The Company’s Miguel Auza mineral processing facility, which processes ore from the Platosa Mine, is located south of the newly acquired concessions on the original Miguel Auza concessions (now part of Evolución). The mineral processing facility currently has capacity of 800 tonnes per day (“tpd”), with opportunities available for further expansion,  to process increased Platosa Mine production and potential new discoveries at either Platosa or the consolidated Evolución concession. As previously announced, a bulk sample from the San Sebastián Mine will be processed later this year in preparation for a toll milling arrangement with Hecla Mining Company on San Sebastián sulfide ore.

Excellon’s 100%-owned Platosa Mine in Durango has been Mexico’s highest-grade silver mine since production commenced in 2005. The Company is focused on optimizing the Platosa Mine’s cost and production profile, discovering further high-grade silver and carbonate replacement deposit (CRD) mineralization on the 21,000 hectare Platosa Project and epithermal silver mineralization on the 100%-owned 45,000 hectare Evolución Property and capitalizing on the opportunity in current market conditions to acquire undervalued projects in the Americas. 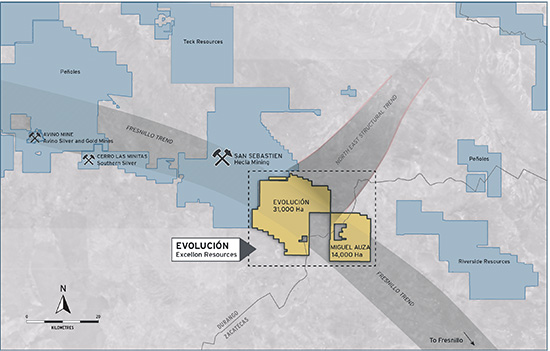