"The extension of the gold, silver and base metal mineralization previously encountered in hole LP1038 southwest to LP1044 and northeast to hole LP1049 is exciting and further evidence that we are on the edge of the large carbonate replacement deposit ("CRD") system that we have been seeking since exploration began at Platosa," said John Sullivan, Vice-President of Exploration. "Recent drilling has provided us with a wealth of data to better vector in on the heart of the Source system, which we will continue to do in the coming months. We have now also resumed the search for additional high-grade massive sulphide mantos in the vicinity of the mine."

LP1044 encountered two mineralized zones, one rich in Au, the other a sulphide-rich skarnified-marble similar to others reported in the same area since mid-2012. The hole was drilled approximately 30 m SW of LP1038, which intersected 13.07 g/t Au, 21 g/t (0.6 oz/T) Ag, 0.74% Pb, 3.57% Zn over 7.25 m (refer to press release dated January 17, 2013). Immediately below the Au intersection, the hole encountered a series of aplitic dykes over a 90 m core length. Such felsic dykes are typical of proximal, large-tonnage Source-style CRD geologic environments and may have acted as conduits for mineralizing fluids. A 6.23 m portion of this area encountered significant Ag, Pb, Zn values along with anomalous Au as detailed above. The first intersection is accompanied by sporadic anomalous copper and the second by anomalous bismuth, both indicative of proximity to a CRD/Source. LP1049 approximately 80 m northeast of discovery hole LP1019 encountered two narrow high-grade Ag, Pb, Zn intersections plus the broader 5.23 m intersection mentioned above, also within an aplite dyke swarm. Each of the holes encountering Source-style mineralization to date intersected skarn alteration and significant metal values, including persistent anomalous gold, and continue to indicate that Rincon lies on the edge of a proximal CRD, the possible Source of the Platosa mantos. Assays for the three holes and maps showing the locations of all holes mentioned in this release are found below.

The Company's geologists have begun a program of relogging and sampling of drill core to prepare a 3D model incorporating all recently generated geological, structural, assay and trace-element data. This program is designed to define clearer vectors to the heart of the CRD/Source system, which will result in more rapid discovery and limit the cost and number of technically challenging deep holes. In addition several Rincon core samples containing significant metal values including Au have been sent for mineralogical study as detailed knowledge of their mineralogical character may provide another valuable vectoring tool.

*Holes LP1044 and LP1049 were drilled vertically while LP1041 was inclined and all reported intervals are core widths. Mineralization banding lies at highly variable angles to core axes in all Rincon holes (as is typical of skarn-related sulphide mineralization) and data points remain sparse. Further geometric information is still required to estimate true thicknesses.

In addition to LP1041, LP1044 and LP1049, 23 holes (12 Source and 11 manto, including two abandoned because of technical difficulties), have been drilled at Platosa since the drill results released on January 17, 2013. While none of the 23 encountered significant sulphides, the Rincon and Rincon-Mantos Corridor holes encountered skarnified marble and the manto holes all encountered the favourable limestone unit, adding to the geological knowledge of both environments. 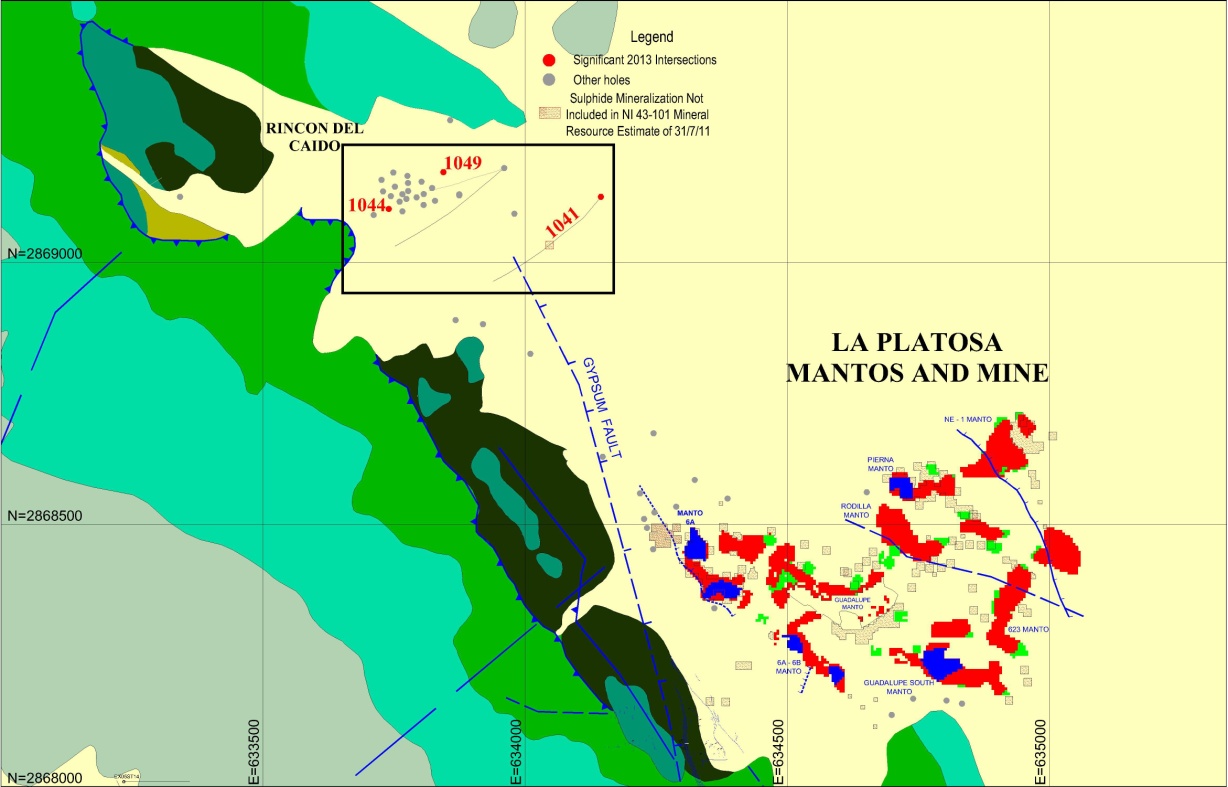 Platosa drill core samples are prepared and assayed by SGS Minerals Services in Durango, Mexico. The lab is accredited to ISO/IEC 17025. Excellon has a comprehensive QAQC program, supervised by an independent Qualified Person.

The Company's exploration programs are supervised by John Sullivan, Vice-President of Exploration, and he has acted as the Qualified Person, as defined in National Instrument 43-101 ("NI 43-101"), for this disclosure.

The Company also advises shareholders of the resignation of Ms. Joanne Jobin, Vice President of Investor Relations. Ms. Jobin has left the Company to pursue other opportunities. The Board of Directors and Management thank Ms. Jobin for her valuable contributions to the Company and wish her the best in her future endeavours. Shareholders and investors are invited to contact Brendan Cahill, President & CEO, at Excellon's head office with any questions relating to the Company.

An Evolution in High-Grade Silver:Â Excellon's 100%-owned La Platosa Mine in Durango is Mexico's highest grade silver mine, with lead and zinc by-products making it one of the lowest cash cost silver mines in the country. The Company is positioning itself to capitalize on undervalued projects by focusing on increasing La Platosa's profitable silver production and near-term mineable resources.

The Toronto Stock Exchange has not reviewed and does not accept responsibility for the adequacy or accuracy of the content of this Press Release, which has been prepared by management. This press release contains forward-looking statements within the meaning of Section 27A of the Securities Act and Section 27E of the Exchange Act. Such statements include, without limitation, statements regarding the future results of operations, performance and achievements of the Company, including potential property acquisitions, the timing, content, cost and results of proposed work programs, the discovery and delineation of mineral deposits/resources/reserves, geological interpretations, proposed production rates, potential mineral recovery processes and rates, business and financing plans, business trends and future operating revenues. Although the Company believes that such statements are reasonable, it can give no assurance that such expectations will prove to be correct. Forward-looking statements are typically identified by words such as: believe, expect, anticipate, intend, estimate, postulate and similar expressions, or are those, which, by their nature, refer to future events. The Company cautions investors that any forward-looking statements by the Company are not guarantees of future results or performance, and that actual results may differ materially from those in forward looking statements as a result of various factors, including, but not limited to, variations in the nature, quality and quantity of any mineral deposits that may be located, significant downward variations in the market price of any minerals produced [particularly silver], the Company's inability to obtain any necessary permits, consents or authorizations required for its activities, to produce minerals from its properties successfully or profitably, to continue its projected growth, to raise the necessary capital or to be fully able to implement its business strategies. All of the Company's public disclosure filings may be accessed via www.sedar.com and readers are urged to review these materials, including the technical reports filed with respect to the Company's mineral properties, and particularly the November 22, 2011 NI 43-101-compliant technical report prepared by Roscoe Postle Associates Inc. with respect to the Platosa Property. This press release is not, and is not to be construed in any way as an offer to buy or sell securities in the United States.